In addition to the linguistic differences between the two regions, there are other factors at play in the dispute between Flanders and Wallonia. The separate political structures is one major factor, whereby, for example, a Francophone party could not stand in Flanders and likewise, a Dutch speaking party could not stand for election in Wallonia. Education is separate and cultural/leisure activities including fashion, radio and television all differ due to the regional split. There are no national radio or television stations or newspapers. Even the labour market and marriage figures have been affected by the divide in the past, as people have either not migrated from one area to another for work purposes or married with partners from the opposing region.

Disagreements also occur over the question of Belgian identity as opposed to a Flemish and Walloon identity. Whilst it appears that the Walloons are more inclined to the idea of being Belgian, in Flanders, there has been the emergence of the Flemish separatist party, Vlaams Belang and the N-VA (New Flemish Alliance). They focus on issues such as immigration and social security and indeed, there has been increasing support for the break-up of social security amongst Flemish voters. This has far less support in Wallonia. Interestingly, whilst Wallonia was historically more prosperous than its neighbour, the opposite is now the case. In terms of the monarchy, Flanders has traditionally been more supportive. However, this has now changed and Wallonia appears to give bigger support. The reasoning behind this being that the monarchy in Belgium is seen as a unifying force rather than a divisive one.

The rise of secularity has also had sociological differences within Belgium and although it is a strong Catholic country, voting on religious lines is more noticeable in Flanders than Wallonia. The question of asylum and immigration also features strongly in contemporary Belgium but the argument here is as complex as it is in other areas of Belgian society. Whilst the Flemish may feel threatened culturally, Walloons are more likely to feel an economic threat.

This might paint a bleak picture of total disunity and division but things are not as clear cut as they first seem. During times of national sporting events to take an example, both regions support the Belgium national team and the whole country united en masse when the Belgian monarch died in the early 1990s.

In June 2010, the Belgium election resulted in a caretaker government with the largest party being the separatist, Dutch speaking N-VA, closely followed by the French speaking Socialists, PS-BE, in second place. A full list and analysis of these results is available from: http://electionresources.org/be/. In January, 2011, mass demonstrations took part within Brussels to support the unity of Belgium and to oppose its break up and to demand the formation of a full time government. In early March, 2011, the situation remained the same: http://www.bbc.co.uk/news/world-europe-12618357

Upon the completion of this assessment on April 1st, 2011, there is still no resolution to this political impasse.

This video clip gives a further explanation of the separatist issues that currently exist within the country:

How Belgians often perceive each other! 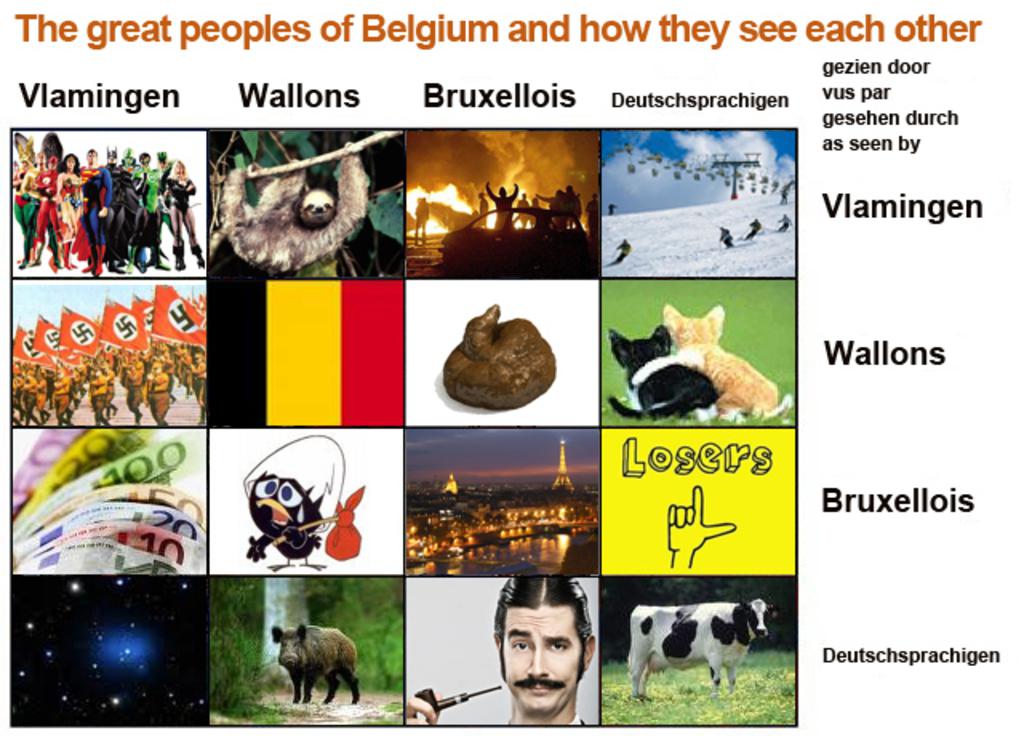