Within the country, there are three separate language communities. The major two are split as follows: 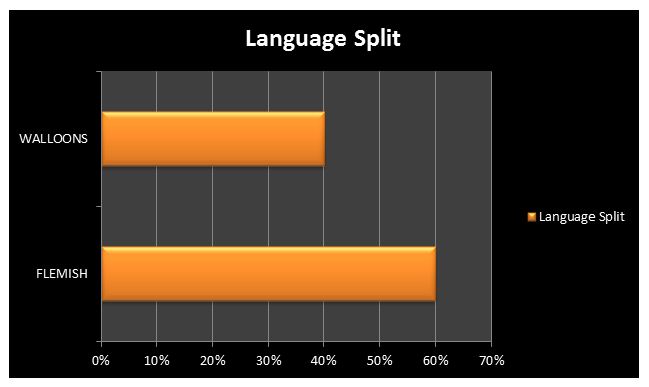 The much smaller German-speaking community makes up around 70,000 people in the south-east of the country.

If the history of Belgium seems complex then the political structure can appear equally confusing to the outsider but basically there are three administrative regions, divided as follows:

There are ten provinces within Belgium and around six hundred local authorities. Successive political reforms during the 1980s and 1990s witnessed the transgression of the country from a decentralised unitary to a federal state. These reforms have resulted in the transfer of certain powers to the regions and communities. As a consequence, the Federal Government only controls issues such as defence, national budget (inclusive of tax matters), and social security. The responsibility for education and culture rests with the communities, whilst matters such as agriculture, energy, environment and transport are left to the regions. Certain issues like health are allocated between different sectors. Regional and community governments are self-ruling. In terms of electoral matters, federal elections are held every four years whilst regional and community elections are held every five years. Local elections take place every six years. During the 1970s the major political parties were divided along purely linguistic lines i.e. Flemish and French. Therefore, no single party was able to field candidates across Belgium nationally. In addition, the media of each region rarely reports on political matters from outside their area. This development of separate political structures has gradually filtered down to social divisions and manifested itself as an even greater barrier between the two communities.